XBO Arcade Sticks, VigEm and a whole ton of "fun"...

This topic has been deleted. Only users with topic management privileges can see it.
last edited by OOPMan
1

Hey all, my first post to the forum but I've been active in the Discord discussing this stuff with @nefarius , @megadrago88 and @evilC. I decided it's time to put things somewhere a little more organised

The short version:
I'm working on getting XBO Arcade Sticks (E.g. Razer Atrox XBO, etc) working properly on Windows 10 using VigEm. This thread will serve as a development/R&D/discussion log for this project.

The long version:
About 2 weeks ago I picked up a Razer Atrox XBO Arcade Stick. It was on sale and I thought it was the XB360 version. When I got it I discovered that it was, in fact, the XBO version (That's what you get for not reading the product description properly) and the thing with XBO Arcade Sticks on Windows 10 is...well...the don't work...mostly, except when they do....which is only under very specific circumstances.

So first, let's do a bit of a dive into the history of this. If we do a Google search for "Razer Atrox XBO Windows" we get a lot of results: 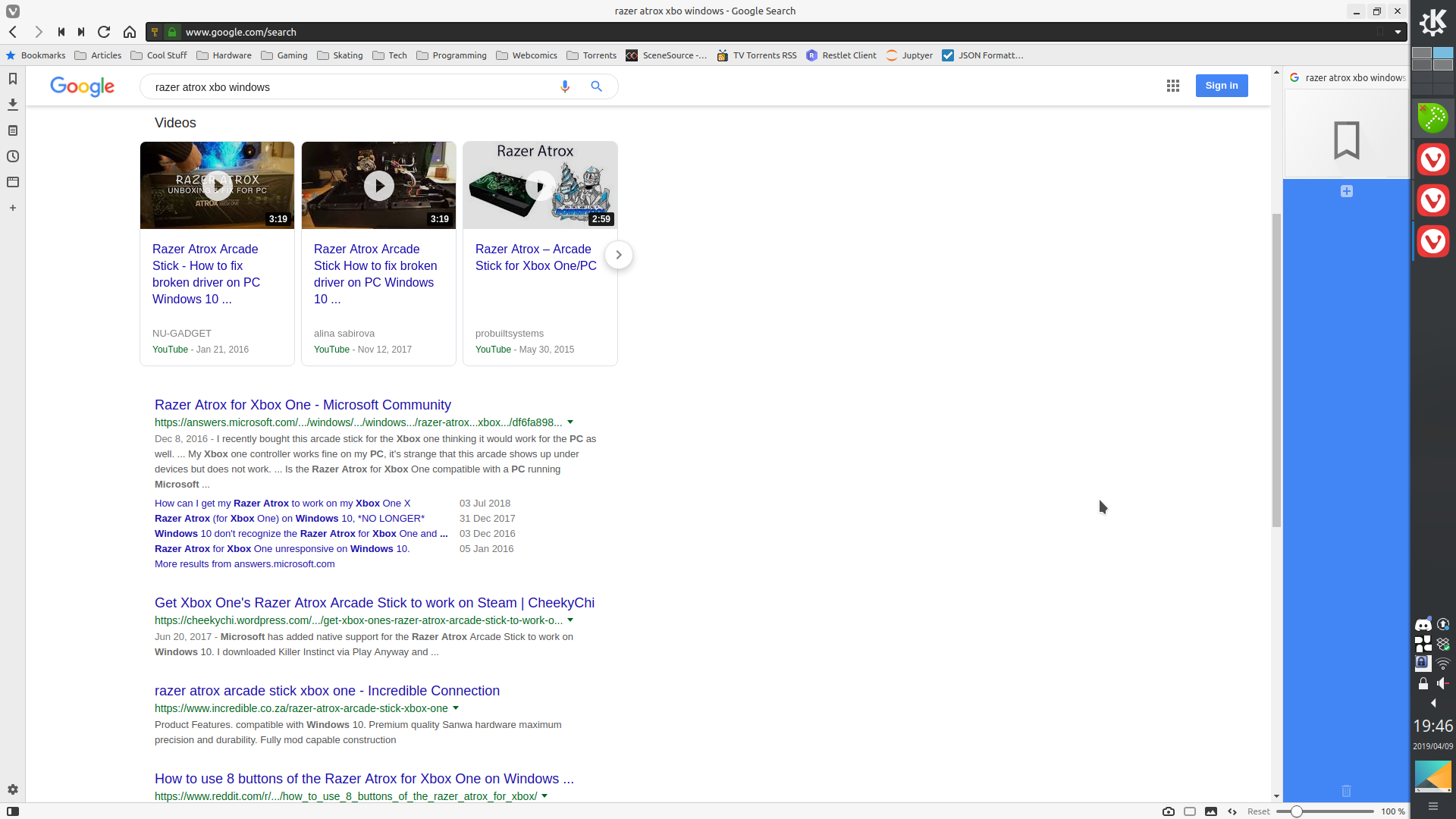 As you can see, most of them are not positive. The summary of the current situation as it stands is as follows:

For further details, I'd recommend reading the following links:

The quest begins...
So, after digging up all this information my first impulse was to simply return the device and instead purchase one that was XB360 compatible as those all work fine on Windows. However, I was somewhat curious and so I began doing a little bit of digging.

First, I installed a piece of software called Device Monitoring Studio. DMS, much like Wireshark + USBPcap, is able to inspect the traffic sent and received by USB devices. Using DMS I hooked into my Atrox and took a look at what happened when I pressed the various buttons (including the ones that didn't work). Sure enough, the controller sent signals as it should. For all the buttons. And it did so even though DMS is not a UWP / WinRT application. My interest was piqued. Clearly the issue was not the device or its communications with Windows. The problem of the stick not being exposed as an XInput device could be due to a bug in the generic MS driver for XBO peripherals on Windows, or maybe just an oversight. Who knows, maybe even intentional, who's to say. However, it was still really strange the using the old drivers or on Linux that only 6 of the 8 face buttons worked. What could be going on there?

After looking at the data harvested by DMS though, I was pretty sure there must be some way to work around this. It wasn't as if the data sent by the controller was especially complex. This lead to search for virtual controller tools and in turn led me to VigEm. I joined the Discord and began to make inquiries.

Back to the drawing board...
Since the Windows.Gaming.Input route wasn't going to work and stepped back and started looking at other options. @megadrago88 suggested investigate interacting with the device via HID. Initially this looked promising but after obtaining the HID descriptor it seems like that avenue is also a dead-end as the device is vendor specific and has no HID descriptor.

Meanwhile, I had been collecting more USB packet data using DMS and also reading the source for the xpad driver and the documentation it referenced with regards to the XBO controller data structures:

Comparing these, I noticed something:

Based on this my hypothesis is as follows:

The road forward...
Now that my preliminary investigations are done I am planning the following dependent tasks:

And that's the long story. I'll update this thread with new details as I go.

A quick status update for today:

Started fiddling with xpad source but despite making changes, getting them to compile and installing the updated driver using DKMS I'm not sure the modified driver is being used. This is because the xpad driver is currently bundled in with the Linux kernel and thus I'm not 100% sure the modified version I compiled is actually being used. Regardless, it did reveal the general behaviour of the Atrox when the system it is connected to does not recognise it: The two lights on the device cycle on for a second or two, the off again, then on again and so on and so forth. dmesg indicates the device is continually connecting and disconnecting. This is probably due to XBO controllers expecting and init packet which is obviously not being sent.

I took a brief look at a Python library called WinUsbPy. Unfortunately this library doesn't seem to work, although I could just be using it wrong. It seems to abandoned anyway though.

Finally, I decided to bite the bullet and throw ZaDig into the mix so I could experiment with the VS2017 WinUSB template project. After some initial confusion I worked out that it was necessary to tell ZaDig to extract rather than install the WinUSB driver for my device in order to allow me to note the Device GUID inside the INF file it generated. With the Device GUID in hand I was able to compile the WinUSB template and run the resultant executable and observe it managing to make an initial connection with the device.

The next step, I think, is going to be to try and send the init packet to the device so that it doesn't disconnect itself

Another quick status update for today:

Tried fiddling with xpad a little further, no luck, back to WinUSB I guess.

Now...WinUSB is proving to be much more successful! I tweaked the example WinUSB application a little more today and achieved two useful things:

Overall, I'm really pleased with the quick progress I've made with WinUSB. Many thanks to @nefarius for suggesting the ZaDig + WinUSB route, it's proving very fruitful!

Didn't achieve too much tonight, did some investigating around the speed of the Atrox. It seems it's a full-speed device with a polling interval of 4ms for each of the end-points.

In theory this means requests to either end-point are guaranteed to complete in 4ms or less, according to USB spec anyway.

The main thing I tested tonight was actually receiving button input. This went quite well. I was able to receive button press data and additionally confirmed once again the 23rd packet being used to send the LT and RT buttons. There were one or two interesting things noticed during the input test:

Rather slow week on my end. Been super busy with work and also trying hard to get over a nasty cold that has the whole family feeling low.

Still, some progress achieved. Rather than forging ahead with the VigEm integration I decided to clean up the WinUSB sample application and turn it into a more general-purpose application than can be used to play with the Atrox.

Next step, integrating with VigEm

Quick second update for the day. I've spun of a new project that will provide the first, simple integration between the Razer Atrox, WinUSB and VigEm.

The application will be quite basic (I.e. Another terminal application using pdcurses) with the aim being to achieve a stable, performant integration between the components mentioned in order to allow for testing with actual games and other applications to be pursued.

Quick update. Nothing of value was done this week, I was out of action with the flu.

Going to try and make a proper start on the next phase of this project this weekend and hopefully achieve something of value by the end of next week.

Some most excellent news. The phase two application that pipes input received from the Razer Atrox via WinUSB through to a Virtual XB360 Controller provided by VigEm is complete to the point that I was able to fire it up, start Mortal Kombat 11 and play around in the Practise mode.

The test was a resounding success, all buttons worked perfectly (including menu, view and guide) and there was no noticeable input lag as far as my casual eyes and fingers could tell.

At some point I want to write a basic application that will register the exact time (down to as small a unit as possible) that an input even from the virtual controller is received which can paired with similar functionality in the feeder application to collect a good amount of data on the extent to which there is input lag. For now, though, initial signs are good.

I'm going to test the feeder a little more this week and put together a YouTube video demoing it in action as well. Assuming all goes well I will then begin looking for testers along with folks to supply USB packet data from additional devices.

I'll also need to think about next steps with regards to the application. It would be useful, in the long run, to support multiple controllers (this is apparently possible with WinUSB...apparently) and maybe also a GUI and possibly even some install tools to get users up and running nice and quickly.

For now though....time to test

Forgot to mention it here, but I posted the first test version to /r/fighters: https://www.reddit.com/r/Fighters/comments/bjmca9/attention_razer_atrox_xbo_owners_other_xbo_arcade/

Movement on it has been slow though. Maybe everyone trying to use an Atrox XBO on PC already got tired of fiddling and sold theirs

Well, anyway, I need to start thinking about doing a more user-friendly version with some kind of GUI. Maybe something that can auto-install the WinUSB driver and so forth.

Finally saw some activity on the Reddit topic. It seems like there were some issues with the WinUSB drive bundle I built so I had to put together a ZaDig guide. I've also updated the README file for the project on GitHub

Well, anyway, there is now one other confirmed user of the tool and he/she seems to be very happy to have full use of their Razer Atrox XBO

I've been spurred on to put together a roadmap for the tool: